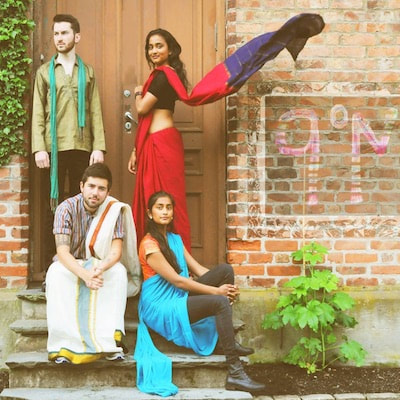 9 degrees north of the equator lies the town of Jaffna, on the island of Sri Lanka, where half of the band descend from. With instruments such as bamboo flute and cajon, 9 grader nord wishes to bring the audience on a journey closer to their instincts.

“Hymn alternates between a rather skewed and chaotic part, before continuing with an explosion of emotions and indulgence. The intention with the song is to convey energy, hope and joy of life. We would like Hymn to be a liberating experience!” – 9 grader nord

Hymn saw the light of day on the middle of the Puddefjord bridge in the traffic jam one afternoon in Bergen. The idea was recorded by mobile and brought home for further finalization. One month later the song was ready. “The best with Hymn is my sister’s extraordinary way of performing it, which raises the song several levels above my original idea”. – Mira Thiruchelvam

“It’s a song we love to perform, which fills us with energy, although it might be a little dangerous for our lead singer’s vocal folds. Hymn might be the song that best describes our personality as a band.” – 9 grader nord

9 grader nord serve a variety of genres, like baila, flamenco, carnatic and jazz. The band describe their music as energetic, mystical and rhythmic, and classifies it as progressive ethnic. Their vision is to expand the listeners’ musical horizon by serving unfamiliar tunes. They have already played at several Norwegian festivals such as by:Larm, KlubbØya, Festspillene, Vinjerock and Bergenfest. For 2018 they are playing at Trondheim Calling and Audunbakken, with more festival to be announced soon!

”A unique and hypnotic sound.”
– Musikknyheter

”Finally some indi(a) pop that stands out!”
– Stoff