Track list:
1. Afraid Of The Ocean
2. Doing Stuff Alone
3. If You Asked
4. Now And Then I Feel Destroyed

Ē is a brand new Oslo-based band who are creating what they describe as lo-pop. The band was formed in the summer of 2018 when Ingvild Nærum (Are You Having Fun Yet) and Chiara Cavallari (FOAMMM) got together and formed a plan. Nærum is the band’s long standing drummer (she plays standing up) and lead singer. Cavallari plays guitar and takes vocal duties on some songs. Ē recently completed its lineup by adding experienced musician and songwriter Sigrun Sæbø Åland (Hysj) on bass.

“Sonically, lo-pop is essentially lo-fi pop music. Thematically, it indicates a sense of feeling small in society and just not being able to mask our pop sensibilities, both of which we reluctantly embrace,” explains Ingvild Nærum.

Ē will release their self-recorded debut EP, ĒP, on the 14th of June through Bergen-based indie-label Eget Selskap. The EP was mixed and mastered by Simen Hallset of Gold Celeste and is an examination of the alternative strategies one subconsciously implements when feeling overwhelmed by the world today. “Our aim is to explore things from a new perspective through our lyrics. Instrumentally, we just try to run with what feels cool and exciting, and even a bit silly.” – Ē

Ē’s first gig was booked before their first rehearsal had even happened. They were cheeky enough to ask and the idea of the band itself was compelling enough to secure them a slot warming up for Omni as part of the city-wide Øya Festival after party, Øyanatt. The band spent the intervening time readying a handful of songs for that well-received first show. They have since played a number of smaller shows in Oslo, and played on this year’s Camp Øya, an official warm up to the main festival which attempts to showcase the best of new Norwegian talent. The band continues to write and record material in their studio and new music will be released later this year. 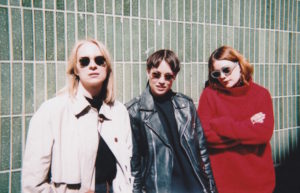