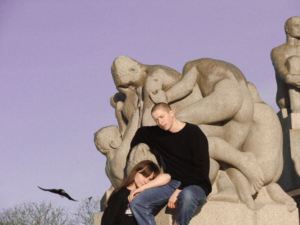 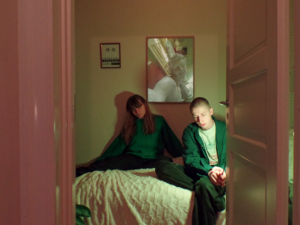 Jouska is a Oslo-based duo that makes electronic music about the obscure parts of your consciousness. They entered the Norwegian music scene with their debut EP «Frog Fiction» April 2018 and did their first headliner show in Oslo the same week.

Jouska’s new single «Born in Cash» is an introverted and dark club baby, packed with more emotion and explosive energy than any of our earlier material. It’s about toxic relationships and loving someone that constantly takes advantage of you and controls your every move. Torn between staying and leaving, you keep having these confusing inner monologues where you constantly contradict yourself. You try to justify their behavior, while at the same time, you want to confront them with all the resentment you keep buried deep inside. Of course, you would never dare to confront them, so you keep on fantasizing about it until your head explodes in fury.

We’re a bit neurotic, and tend to obsess a lot over small things. Our lyrics are kind of the opposite, with bigger and more vague themes, or sometimes specific comments on political or other social issues. Somehow it feels like the music reflects us really well, although we don’t necessarily write about our own lives. – Jouska (from an interview with http://www.bornmusiconline.com)

Jouska consists of the couple Hans Olav Settem and Marit Othilie Thorvik. They met in Oslo while studying music, and quickly realised that they had really similar taste in movies, music and aesthetics in general.The duo has previously released the singles «Glitter Chaser», «Pills.» and the EP «Frog Fiction», through the label Koke Plate, a record label based in Oslo. Three additional singles, «Titanics», «Berverly Mind» and «Bring You Back»  have been released as a collaboration between Koke Plate and Eget Selskap, a record label based in Bergen

It’s hard to stand out in modern day’s alt-pop landscape, but bewitching Oslo duo Jouska are worth your time.
– http://www.bornmusiconline.com

I’m rearly left speechless after a concert like I was this evening, and when the band has worked so hard to create this experience, it is well deserved to call this one of the festival’s (Trondheim calling) best concerts.
– Studentradioen i Bergen 6/6

This is almost as much an art expression as it is music. Beautiful vocal harmonies, captivating sound collages, visual effects and unexpected twists. Exciting, fascinating and almost as strange as it can be.
– Bergens Tidende 6/6